Join us sailing from Malta to Sicily and back

We are opening a new sailing route in the Mediterranean this year – boosted by the success our latest sailing trips between Sardinia and Corsica, we double up on the idea of ‘two countries, two cultures’.

Situated at the crossroads of the Mediterranean, successively under the influence of the Phoenicians, Carthaginians, Romans, Byzantines, Arabs, Normans, Sicilians, Spanish, French, and British, Malta has evolved an absolutely unique culture. The Maltese language itself is a singular blend, a language of Semitic origin, but written in the Latin alphabet, with a huge influence of Sicilian, and a large stock of English loanwords. Besides Maltese, English is spoken very widely, although with a peculiar accent.

Malta is a country like no other, member of the European Union since 2004, and still with a very distinctive feel to the other European nations. It is a place where small corner-of-the-street shops have not yet been supplanted by chain supermarkets, where the elders still gather on a bench in the evenings, where the churches are overflowing on Sunday mornings, and where the towns rival in lavish fireworks for their traditional festa, yearly events celebrating the parish patron saint.

Everything is smaller here. The main island, Malta, is 28km by 13km, and the sister island Gozo only 14km by 7km. On these small rocks live more than 400,000 people. The first impression is one of an urban jungle, not one of modern concrete and glass and skyscrapers, but one of a jumble of flat roofs, local limestone and baroque churches, gripped in a maze of narrow streets almost constantly jammed with traffic. Yet, next to this chaotic urban sprawl, lives another Malta, made of a mosaic of miniature vegetable fields farmed by hand, dry garrigue sprinkled with carob and fig trees, and wild inaccessible sea cliffs where the only sounds are those of the waves and the cackling of the sea bird colonies.

Travelling by boat will allow us to navigate all these faces of the islands, drop anchor in remote bays, hike along the sea cliffs, or mingle in the traditional village markets and celebrations.

After 12 hours of overnight sailing, we shall be surprised by the contrast on the Sicilian coast: smooth beaches instead of rugged cliffs, wide uninhabited hills instead of terraced fields, stucco facades instead of Maltese limestone, pizzerias instead of pastizzerias, and a language definitely more familiar to many of us.

This sailing trip is for those who would like to discover the unique culture of Malta, the baroque of Sicily, experience the sweet and disorienting feeling of arriving to another country by sail, or try out night navigation and watch keeping for the first time.

Sailing to Sicily and back

Depending on the wind conditions, we will start our sailing around Malta, dropping anchor in a few more remote bays and get slowly acquainted with our crew and yacht. Our crossing to Sicily will ideally be sailed by night. This way we will keep more time at day to explore the island.

Sailing at night is always a unique experience. Leaving in the evening we shall watch the sunset out at sea, the colours change and the first stars appear while we send one of us down below to switch on the navigation lights. Eventually, as the night falls all we shall still see are the lights of Malta fading in the distance.

We will take 3 hours watches in turn in small teams, while the remaining of the crew sleeps cozily (or tries to!) in the cabins below. While the helms(wo)man keeps an eye on the compass or navigate with the stars, the crew keeps a lookout for other boats, listens to changes in the wind, and trim or reef the sails if necessary. You are guaranteed to roll around in your bed every time we tack! Finally, after a night on course, the first colours of dawn appear on the horizon. We can spot Sicily in the distance, while the first sleepy heads peak out through the companionway. It’s time for a warm cup of tea or coffee, silently watching the sun rise over the Mediterranean sea.

The crossing one way is between 50 and 60 nautical miles, which takes between 7 and 15 hours of sailing, depending on the wind. If the wind is too strong however, it is possible that the crossing can not be done, so be aware that in that case we may not be able to see Sicily at all, and instead stay the whole week around Malta. But do not worry, even in that case we have a whole panel of ideas for ‘plan Bs’.

Check Dates & Prices
Talk To Us*

*To sail at other dates; to organize a private trip; to get in touch.

Plunge into the rich culture of Malta and Sicily. We will start with a stroll through the beautiful fortified cities of Malta, then set sail to the baroque towns of southern Sicily.

We will sail along the impressive cliffs of Malta and Gozo, pass by sea bird colonies and mysterious caves where the waves echo from far away. Enjoy the privilege of dropping anchor in a protected bay for the night. The only lights are those of the stars and the only sound is that of the wind.

Sail through the night from Malta to Sicily and back. See the sun set as we sail out, and as the darkness falls get ready for your first watch. Keep an eye on other boats and for changes in the wind, while your crew mates prepare a warm cup of tea down below deck.

What you can expect to do on this route. 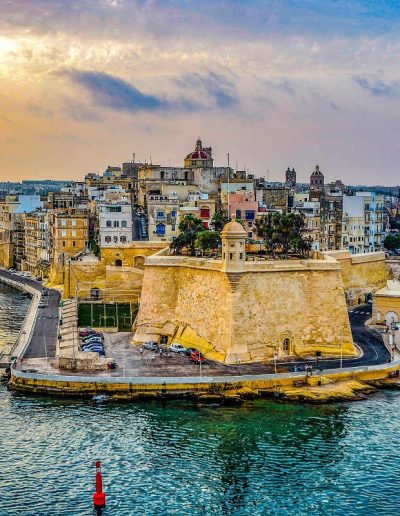 Discover the cities build by the Knights of Malta. 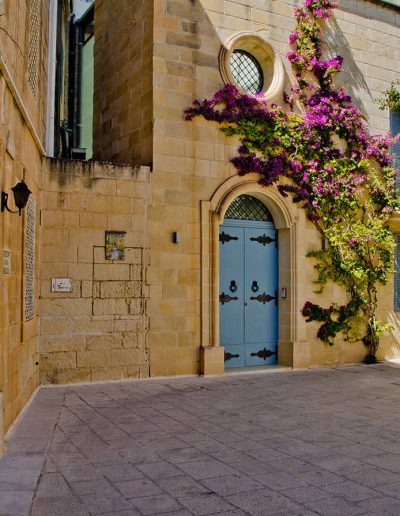 Let’s take an evening stroll through Malta’s old capital city and enjoy a view over the whole island. 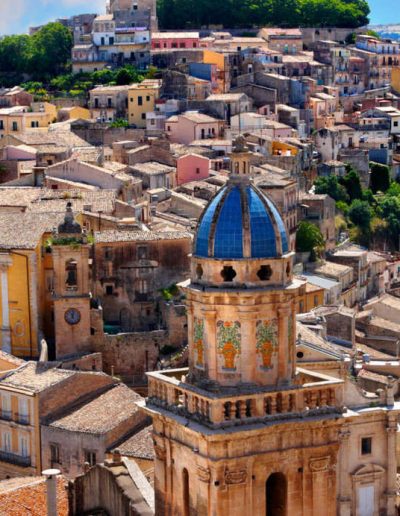 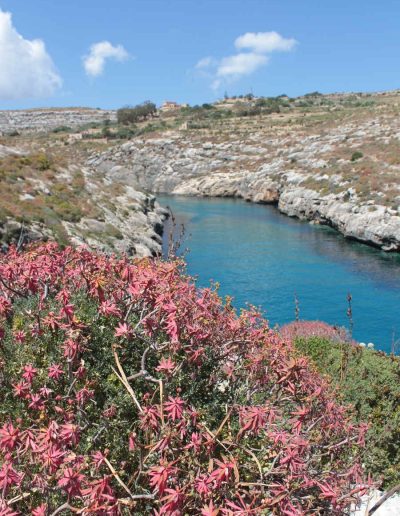 Drop the anchor in a remote bay for the night. 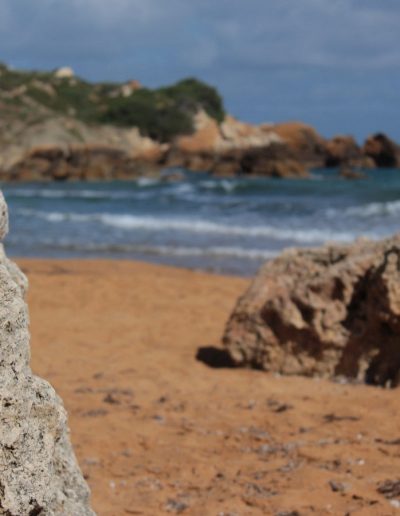 From the unique red of Gozo’s Ramla beach to the white of Marina di Ragusa, let’s sand it up! 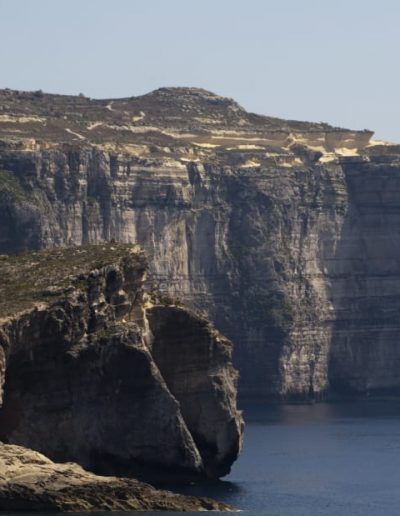 We are true to the discoverers’ spirit and plan our adventures accordingly to the winds, the weather and your wishes. This means the order as well as some of stopovers may be different than presented below. Leave planning at home! The plan showed below is only an indicative itinerary and your trip may differ. Only the mad ones sail against the wind!

The world famous fortified capital was built by the Knights of Malta following the Great Siege and mostly completed in just 5 years between 1566 and 1571. On a high peninsula surrounded by the sea, it is encircled by deep ditches and high walls, making it virtually impregnable. We’ll sneak ourselves through the main gate, take a peak from the Upper Baraka Gardens at our yacht in the harbour down below, walk down Republic street and take in the charm of the city.

Comino is the little sister island of Malta and Gozo. Currently it is only permanently inhabited by a single family, but in the past it was variably used as a prison, a quarantine hospital, and even recently as a pig farm, the remains of which can still be seen. Comino is especially famous for its massively overcrowded ‘Blue Lagoon’ that we will avoid at all costs during daytime. If the wind allows we would rather anchor in Santa Maria bay and take a hike to the Blue Lagoon after all tourists are gone!

Dwejra was the site of the famous ‘Azure Window’ which unexpectedly collapsed in March 2017 (those who came too late to witness it standing are advised to rewatch the first season of Games of Thrones). We shall shed a tear to the disappearance of this natural monument, take a swim in the Inland Sea (a salt water lagoon connected to the sea by a narrow cave opening), and walk back to our boat anchored safely behind the ‘Fungus Rock’. On this rock a rare type of mushroom with alleged medicinal properties supposedly grows, and it was guarded jealously by the Knights of Malta. Today the access is still forbidden.

Marina di Ragusa, our likely landfall in Sicily, is mostly a new town built on what was until half a century ago a sleepy fishing village. However, 30 minutes away by car is the wonderful town of Ragusa itself, a marvel of Baroque architecture built atop the hills. After our night crossing to Sicily, we shall take the whole day to ourselves on land, rest, go for a walk and gelato, then if we wish we may take a transport to Ragusa and spend the afternoon and evening strolling in the historic district of Ibla.

Next to Ragusa, we may also take a trip to the neighbouring town of Modica, another sublime example of Sicilian Baroque. The town has made a speciality of a distinctive chocolate which is said to be inspired by an old Aztec recipe. We can go for a tasting session, but the recipe is a well kept secret! We can then have a digestive walk up the 250 steps to the St George cathedral, listed as part of the UNESCO World Heritage, and marvel at the sundial embedded in the cathedral floor.

The village of Portopalo di Capo Passero marks the South-Eastern tip of Sicily, and therefore could be an ideal starting point for our return journey, or the other way round depending on the wind. A pleasant and old fishing town, it has many great beaches where we can relax before the night crossing to Malta. Why not take a walk to the Castle Tafuri?

Nested at the head of a large bay, Marsaxlokk is probably the most difficult town to spell and pronounce in the whole Mediterranean. It’s also a colourful harbour filled with the blues, yellows and greens of the many traditional Maltese fishing boats (Luzzu). The design of the Luzzu may date back to Phoenician times, and possibly as a legacy, they are often painted with a pair of eyes on their bow. Marsaxlokk is the main traditional fishing harbour in Malta, and is famous for its Sunday morning fish market.

Day 8 is the day to say goodbye. All the miles sailed, coasts visited, skills gained and time shared with others will make you bond and build relationships. Cherish these, keep in touch and remember that the Naleia Sailing family is there. See you another time!

What people say about Naleia

Things To Do On This Trip